born in 1965 in Beirut, Lebanon, Chammaa has lived in Germany since 1975. In Berlin, she studied Islamic and Arabic studies, political science, and German as a foreign language. Since 1990, she has been translating Arabic literature into German (Elias Khoury, Sahar Khalifeh, Khalid al-Khamissi, Ghalib Halasa, Girgis Shoukry, Qassim Haddad, among others). She also […]

Joumana Haddad was born in Beirut in 1970. The multi-lingual poet, journalist and translator also works as a performer and visual artist. In 1997, she began to work for the prestigious Lebanese newspaper »An Nahar« where she is currently head of the culture section. She had published her first collection of poems two years earlier […]

Iman Humaidan Younes was born in Ain Enoub, in the Druze section of the Lebanese mountains, in 1956. From a liberal family, she studied Sociology at the American University of Beirut and in 1989 started to work as a freelance journalist, focusing above all on cultural and social issues, as well as human and women’s […]

Hassan Daoud was born in Beirut, Lebanon, in 1950. After studying Arabic Literature he worked in Beirut as a journalist during the civil war. From 1979 to 1988 he worked as a writer for the daily paper ‘Alsafir Daily’. After that, he was a correspondent for eleven years for the international Arab newspaper ‘Al-Hayat’ which […]

Hazem Saghiehwas born in Lebanon. He is columnist and editor of the political weekly supplement ‘Tayyarat’ of the daily newspaper ‘Al-Hayat’ in London. Especially in the western world, he is esteemed for his commentaries regarding the current political situation in the Near and Middle East. He published several books in Arabic, at last in 2003 […]

“When one makes children’s books, one actually makes them first and foremost for oneself, for the child that one was and, wishfully, still is.”  Grégoire Solotareff is a child of various cultures.  He was born in 1953 in Alexandria, Egypt, the son of the Lebanese doctor Henri El-Kayem, and the Russian emigrant and artist Olga […]

Fuad Rifka was born in Syria in 1930 and moved to Lebanon with his Christian parents in the 1940s.  He studied Philosophy in Beirut and obtained a Ph.D. in philosophy from the University of Tübingen in 1965 with a dissertation on the aesthetics of Martin Heidegger.  Since 1966 he has taught Philosophy at the Lebanese […]

François Zabbal, born in Lebanon, is a writer, philosopher and translator. Zabbal was at one time a Professor at the University in Beirut, but in 1984 had to go into exile in France. Since 1996 he has been chief editor of the cultural journal »Qantara«,  published by the Paris Institut du Monde Arabe. Among other […]

The poet, painter, and philosopher Etel Adnan was born in 1925 as the daughter of a Syrian father and a Greek mother in French-controlled Beirut. Her childhood was shaped by linguistic diversity: Greek and Turkish as her mother tongues, Arabic in her surroundings, French at school. She studied philosophy in Paris. Her rejection of the […] 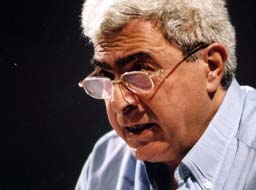 in 1948 in Beirut, Lebanon. He studied History and Sociology at the Lebanese University in Beirut and at Paris University.  As a young man, Elias Khoury experienced the Arabic defeat of 1967.  The scene of a new wave of Palestinian refugees lead him to enforced moral and political engagement for justice in Palestine. His experience […]

David Habchy, born in 1985 in Beirut, belongs to a new generation of Arabic artists working in the fields of illustration, graphics and animation. Even as a child, he already started experimenting with projects involving the conceptual combination of photography, graphic elements, theatre and music. He completed his studies of Computer Graphics and Animation at […] 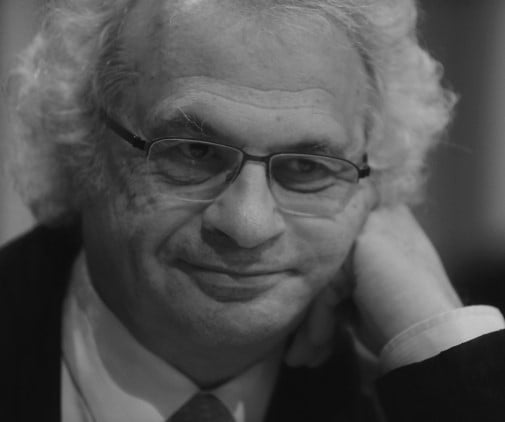 born in 1949 in Lebanon, has lived in France since 1976 as a journalist and author of novels, essays and opera librettos. He has visited over sixty countries and written on issues relating to identity and relations between the West and the Arab World. His books have been translated into more than fifty languages. In […]